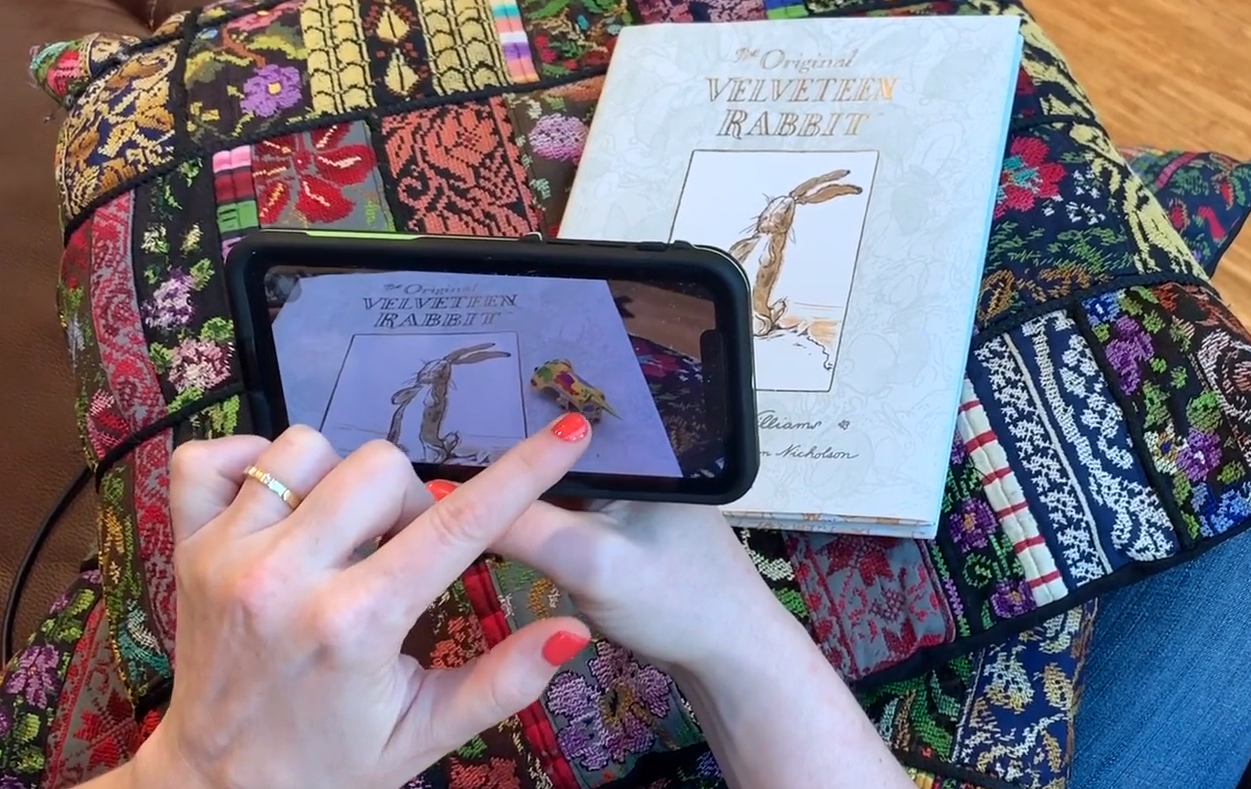 Scan (or tap) the QR code with your smart phone and you can take my childhood memory of Corduroy Dog with you and make your own story. Keep scrolling to share your story, find out“how to” and see a demo, or to watch the film.

Some hashtags and @’s:

A story of how a childhood memory became Real. The main character, Corduroy Dog, is made in virtual 3D from the memory of a precious childhood artefact, and becomes the main character in the re-telling of a favourite bedtime story.

As seen in Tate Staff Biennale 2019

Corduroy Dog was made real by Vectary 3D.

Here is the story of how a memory and a seminal artefact from my childhood became Real. 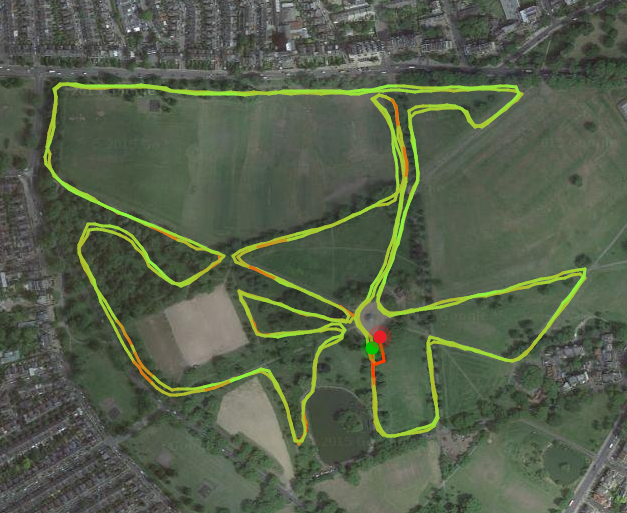 At first glance, this is simply a different way of drawing, in which I am performing the act of drawing, but not making the marks with my hands, but rather with my feet. I.e, By carrying a smartphone whilst exercising, through use of an app called Nike+Running, I create a recording of the activity – the route, the distance run, and the time elapsed from start to finish. Thus, the running activity is recorded as a line drawing superimposed over the satellite imagery of the location.

I made the gesture, the movement with my body, and Nike+Running software made the mark.

At another level, these drawings question the agency and intention: who really is the author here?

These abstract images are also about recording and memory in that, much like marks on paper, these digital drawings are the only record of my having been there at that moment, in that place. But wait… current technology and insta-culture allows another means to state “I was Here”… through a smart phone and social media.

Symbols begin to emerge from abstract shapes, asserting themselves with hashtags…suggesting a deeper meaning, they try to become something more than just the length of a line… a starting point, an ending point, a shape, an object, an animal…

Have a look at the digital slideshow of the Instagram drawings on Vimeo [6:19 minutes, looped] – as displayed on an iPhone 6/6s

This is the second version of “Dreams of the Rat Race 2 (No Exit)”, a short looping video [15:03] in which I engage with this office space as my memory of my own prior office career… That 20 years always felt like kind of a trap, or like Sartre’s “no exit”… The viewer can be part of this nightmare; as they stand in front of the projection, their shadow becomes included in the memory of that former life…around and around never really getting anywhere… this time, there is a running course marked in the circuit of approximately 330m. The viewer goes ’round and ’round and occasionally, another runners appear in the frame.

A group of runners will pace around and around and around this uncommonly short course (of approximately 330m) in order to make up the marathon distance of 42K. Some people sign up for runs like this for the challenge, or to achieve a particular fitness goal; others have nothing better to do on a Sunday afternoon.

What else happens besides work in the workplace? Outside the norm when the conventions of behaviour are relaxed for a while. A ritual that acts as a pressure valve. Making the mundane tolerable.

This particular race is a response to the site itself…a circular office would be a perfect (and perfectly ridiculous) race track demonstrating and documenting (thru video and still image), the silliness that is running for 4-6 hours at a time (marathon runners have to be a bit mad no?) as well as the silliness that is containing this 42km in a 350 metre track (130 laps, give or take)…

A number of people from the Right to Movement running club have been invited to participate, as a sort of preparation for the upcoming Palestine Marathon in Bethlehem, which sees runners going around a necessarily abbreviated course multiple times because an enormous concrete wall prevents a single circuitous route of 42K.

At the same time, this race would be reminiscent of “the rat race” that this office space once embodied; the endless cycle of getting up, going to work, “making a living”, coming home, sleep, get up again next day, and start again. Over and over. Another kind of madness…

Suddenly this race becomes an experiment in the subjectivity of time and place…there will be no markers along the course to indicate distance, nor will there be a race clock, leaving the runner to decide:  when is enough, enough.

What was the point of this “good cause” marathon, we all wondered… a race in which we clamour for attention, look at me doing good things, yet at the end, almost no one would bear witness but the runners themselves? An expression of the artist trying once again to be noticed, to be seen as working hard, striving determinedly to be recognised for her passionate sincere goodwill… soon easily forgotten as a near-nothingness. All that hard work for nothing changed at all. Isn’t that what much of activism feels like, a rush of runner’s high followed by numbness and forgetting as soon as a shiny new start-line banner is unfurled, and the next race is called. 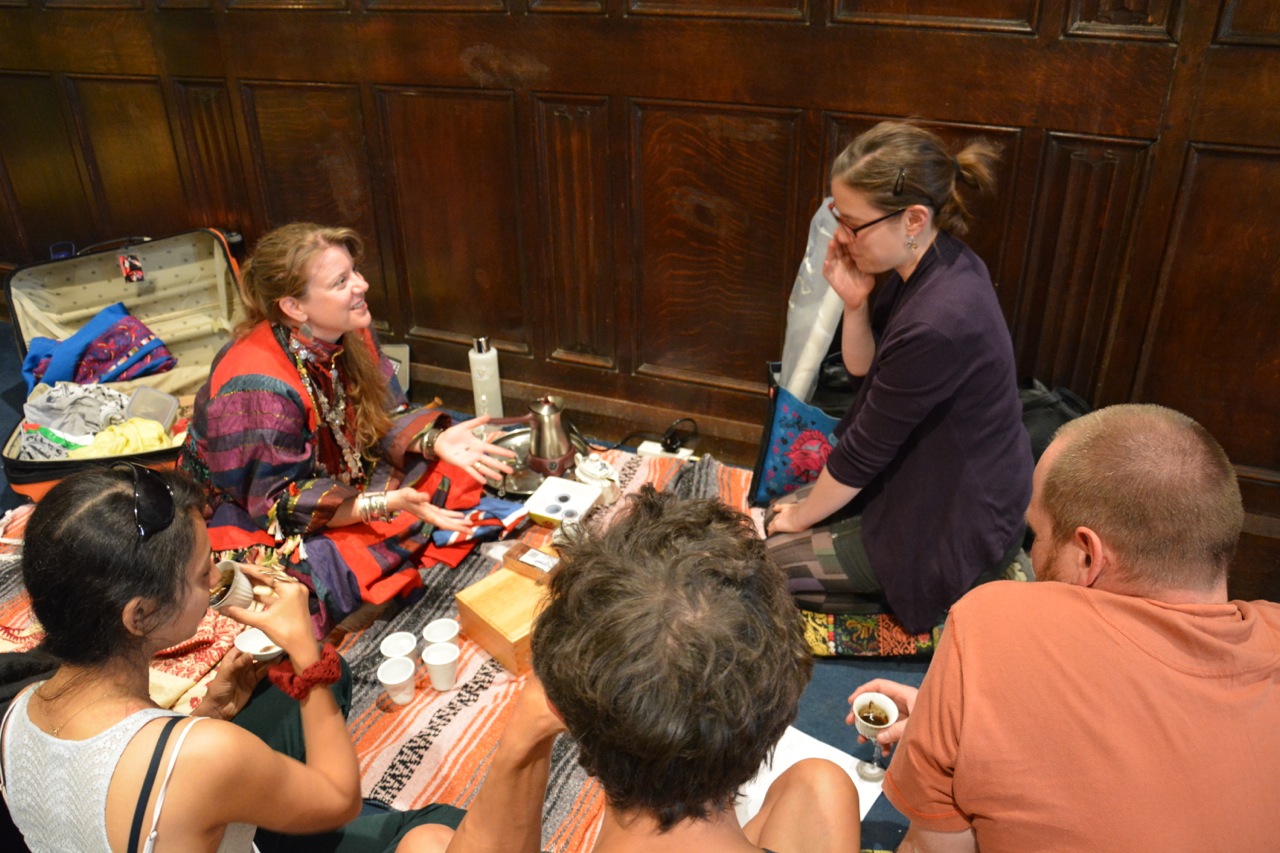 The centuries-old coffee ritual is a custom of deep cultural significance, where this rich dark drink, often served with dried dates or other sweetmeats, is a traditional gesture of warm welcome offered to all guests who happen by. An old Middle Eastern proverb goes something like, “A single cup of coffee creates a friendship that lasts for 40 years”.

My first taste of Arabic coffee was nearly 25 years ago, by the hand of a Palestinian woman who is also my friend. What fond memories I have of the many enjoyable hours accompanied by these tiny cups, and not long after that first afternoon, how proud I was to serve from my own ibrik, a very tasty and authentic “qahweh arabiya” to make my Palestinian husband feel right at home.

It’s many years later, and those friends are miles away in a time that was decades ago; nonetheless, they are never far from mind and even now, I often crave this delicious drink, stirred with so many memories.

In ‘arabic coffee’, I have appropriated this beautiful act of hospitality again as my own, in order to explore an aspect of my personal identity as I create a moment that is enriched by sharing in which I invite guests to share a cup of coffee and a conversation with me, making memories with new friends and old.

‘arabic coffee’ is part of ‘Collaborationem’, a group exhibition at St Saviour’s Church, Pimlico, from 3-6 July 2014. 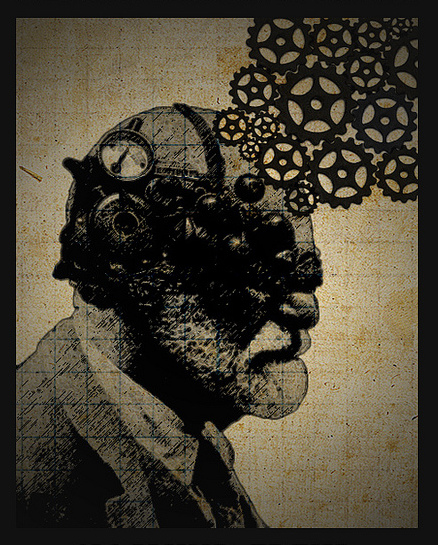 Group exhibition in which I participated, Februrary 2014. The work that was shown in ‘Live in your Dreams!’ was a performance and installation entitled, ‘limn reveries’.

in Live in your dreams! exhibit at The Crypt Gallery, St Pancras

From 26 February through 2 March 2014, I’ll be doing a drawing/performance piece called “limn reveries”, in a group exhibition “Live in your Dreams!” at The Crypt Gallery, St Pancras Church, Euston, London. The exhibition is curated by Stéphane Verlet-Bottéro, whose research and interests are focused on curation as well as making his own work related to art and science.

Which is just an old fashioned way of saying, I’m recording dreams… Basically, what I’ll be doing is attempting to achieve a quasi-meditative state under which I’ll conduct “automatic” (or subconscious) drawing. The thinking behind the exercise is to listen to meditation sound tracks, whereby I can  “open up” my subconscious and access the rich imagery there, and then record or draw what I see.

Or click the link to see a short film documentation of the performance/installation on opening night (26 Feb 2014).

Some of the drawings from the performance and installation: