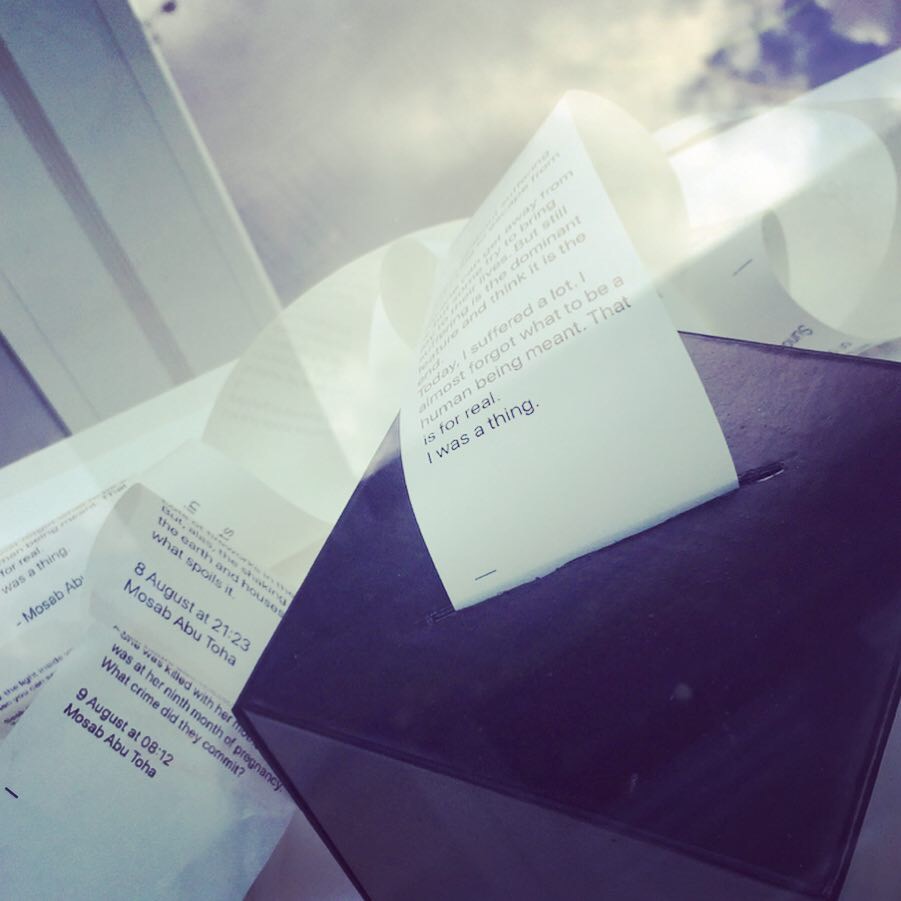 A mysterious black cube-shaped poet-object slowly extrudes a long strip of paper that gathers in a growing pile. The text contains poems, one-line reports, and other thoughts by Mosab Abu Toha, a poet in Gaza. Every now and then, another few lines of text come out as Abu Toha shares his poetry and prose with UK viewers real-time via the Internet, even while remaining entrapped in Gaza City, presuming of course, electricity supply is available to his neighbourhood.

It is clear to the audience that it was Abu Toha’s poetic voice coming from the box he is in, only to realise it is British artist Kelise Franclemont who made the box. Poetic on all sorts of levels, and problematic, and could be seen as a manifestation of AND a critique of (among other things) the colonial past between Britain and Palestine, still in place today, and still affecting both artists…but in vastly different ways. For instance, complete freedom of speech is only afforded one of the artists, while the words themselves can only come from the artist who is not completely free.

“I was a thing” is collaborative effort between British-American artist Kelise Franclemont and Gazan poet Mosab Abu Toha.

Mosab Abu Toha is an author, English teacher, and founder/director of the Library and Bookshop for Gaza, a project which gained international support through a humble crowd-funding appeal, resulting in a growing library of English, Arabic, and other volumes made available to the Gazan public. Along with the hundreds of books and periodicals, Abu Toha and his small staff offer a range of English classes, creative writing and literature clubs, and other activities.

Kelise Franclemont is a visual storyteller offering objects or experiences about remembering and identity, often considering the immutable line between Other and Self. In the making, she will often appropriate materials, objects, or other more ephemeral cultural artefacts such as ritual, using documentary tactics to remake these artefacts into a new narrative, or into a newly-contrived situation based on some truth, allowing the viewer to discover truths of his or her own.