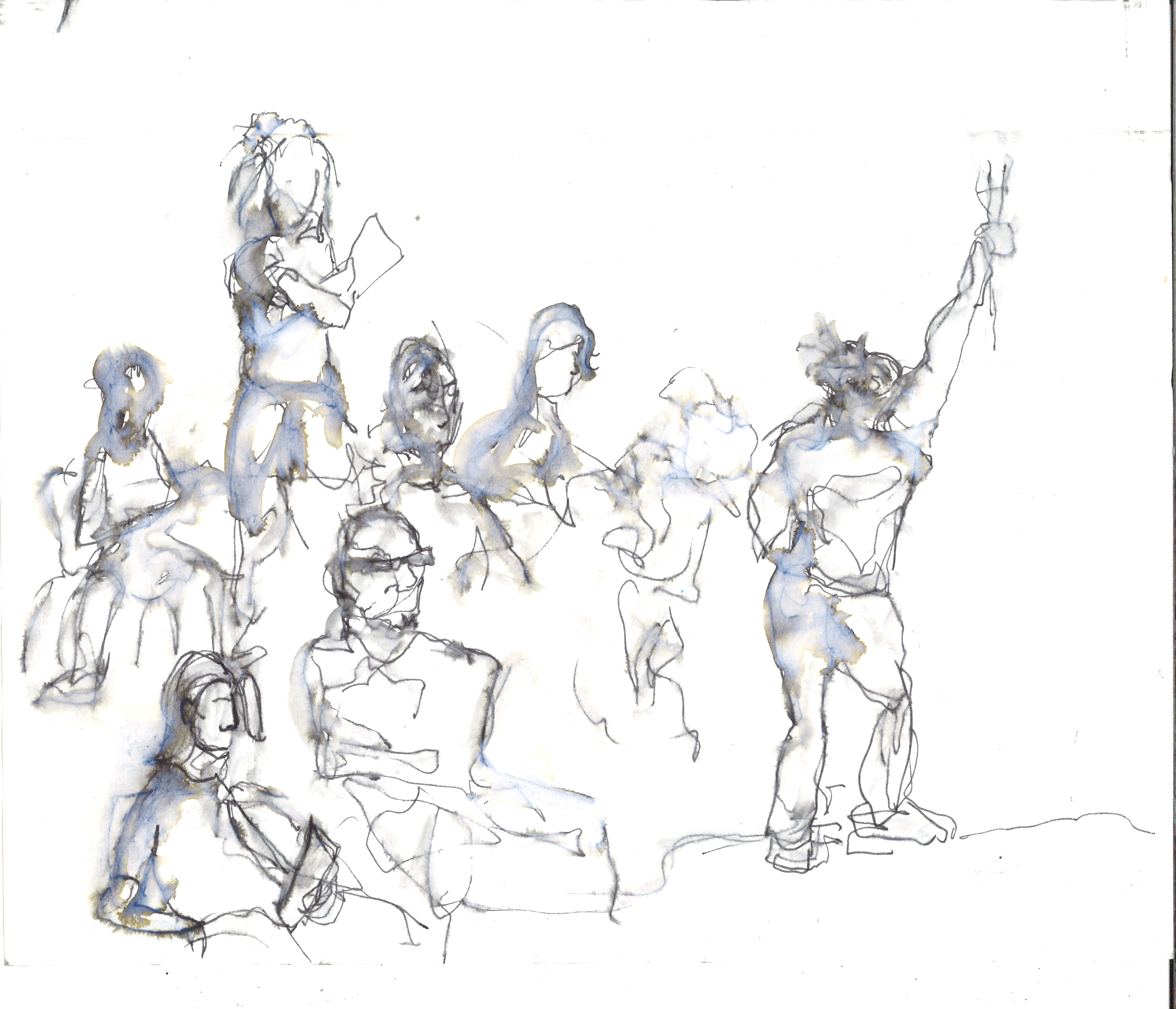 The following text is a journal from two sessions as a sketch artist observing the rehearsal of the London Shakespeare Workout programme directed by Dr. Bruce Wall, where I aim to capture some of the live performers as they practice their craft in a most unexpected venue in London.

If you’ve read this one already, scroll down a bit or click 19 January 2018 to jump down the page.

I arrived to the gate with my pens and sketchbook… waiting to be registered, checked off the list, given a visitor’s pass (to be worn at all times). Anticipating the day and a little bit nervous (I shouldn’t have read those articles the night before; someone died here, not too long ago).

Guided through a maze of corners, past the glittering Christmas tree, narrowly brushing by the incongruous painting which wouldn’t be out of place above a matching sofa …more corridors and locked doors… to room C3, splashed on all walls with the kind of colourful signs reminiscent of primary school, letters 25-cm high cut from cheery flowered paper, spelling out “food poisoning”, “Campylobacter”, “Clostridium perfringens”… A few empty paper cups are accompanied by bits of rubbish, untidy stacks of paper strewn about, mismatched chairs abide patiently in an haphazard circle. It’s pretty much a performance rehearsal space anywhere…

The musicians set up and began to practice, working out some of the more difficult cues. I found a table to lay out my pens, my sketchbook, all of us warming up our instruments…and waiting for

…the actors to arrive.

Four energies burst in all smiles and a handshake, Wayne shining confidence in a dancer’s step; Vlad his spirit gently glowing with firm purpose; Edwin, solemn, kind, a professor, a mentor, someone’s dad perhaps, in another life… Jacob with his whole soul in his eyes, not sad exactly, but something’s there, just behind the dignity and resolve.

After polite introductions all around, the actors begin to rehearse their lines of Shakespeare, drinking in stage direction from Dr. Bruce* like eager blooms sipping the rain after a day of too many fiercely rooted under the burning sun…

I tried at first to move my pen in time with the actors and saw many things too important to miss in a downward glance… my pen just stopped and started; it’s impossible to grasp a whole form so I am concerned only with the fleeting gesture of lines, a posture, and I focus on the between-moments

…self to character to self again.

Three more actors arrive, two whose names I can’t quite hear over the musicians testing the newest phrase, the first tall and well-met with the easy smile full of welcome, the second whose spirit, unlike the others, is a carefully guarded mask.

Still I’m not convinced by the tough-guy-i-don’t-care exterior, who pretends to be here for a change of pace – I can feel the gusto with which he gathers his why-not in a fist to shout in chorus “I’m free!” …and Daniel, a spark about to ignite… and I saw it happen when he became an old man, palsied and stumbling, unable to speak…around him courage swelled and defied all weakness, to help him raise his hand, grasping an imaginary torch that we all could see. And he is a hero.

I am surprised when the guys crowded around my table at the end, to check out my drawings, hoping to see themselves maybe… and I wish that I’d been able to capture more between my eyes, fugitive moments, and my pen, to portray each of the men before me: Wayne, Vlad, Edwin, Jacob, “all smiles”, the one I don’t know quite yet, and Daniel.

Each of them proud, confident, strong… powerful and vulnerable and brave…warm, open, funny, creative… and beautiful.

Daniel, shyly bold, asked me to draw him… not of vanity I felt, but of a desire to be viewed under a different light… I am humbled by his confidence in me, and I don’t know what to say, except that I’ll try. I’ll do my best.

On the tube journey home, I was afraid that my memory would fail me, even as I hurriedly corrected lines, filled in spaces, and scribbled notes…

My thoughts race to a pause…

These men…it’s not pity I feel for them….I don’t know what they’ve done to be locked up…it’s not my business, and I find I’m not even curious…

My job here today was not to know such things anyway, but to look and to really see.

Thanks to these seven inmates, actors, people for showing me the place you happen to be in now does not have to define you, your present, nor even your future.

Who do you want to be, you can be; now that is the question.

There are no musicians today to accompany the scenes; it’s just myself and Bruce from the outside on the return to Pentonville. I’ve also recovered somewhat from my nerves; though I’m still not 100% used to the idea of being in a place with no way out for any length of time, at least I know what to expect here: register, visitor’s pass (to worn at all times), narrow corridors and plenty of corners, no Christmas tree this time, and more locked unlocked locked again gates.

Bruce and I both warm up, he with his script, I with my sketches, as we wait for the men to suddenly pour in all at once to C3, the same room as before.

Like my last visit, I am greeted warmly by familiar and friendly faces, with a few new ones, and am glad I had, in the weeks previous, attempted to sketch outline portraits from memory; all the guys seemed pleased to have been remembered even imperfectly (although there was some comedic debate as to whether or not I had gone too far with the lace collars and “men in tights” costume ideas borrowed from the 16th century).

Knowing the impossibility of describing anyone in hastily scribbled ink, always moving, pacing, gesticulating, I chose pencil instead to observe the actors sitting away from centre stage, still for moments at a time, heads bowed, awaiting cues, or mouthing their lines.

I couldn’t guess why the mood today was one of familiar ease (after all, most men had been an artist’s subject many times before), yet still detectable was a faint thrum of tension. Later, this undercurrent of nervous energy is explained when I am astonished to learn that the actors were due to perform their piece for an audience in a few days’ time – with only the equivalent of about a week of rehearsals over the same number of lines for which outside companies would possibly take months.

Back in my sketchbook, Daniel is my momentary subject, yet I can not quite get his likeness; he seems so youthful, hardly containing an excess of energy as he recites his lines, yet on my paper is inscribed a soul that has weathered more years than would be admitted by his actual age.

Abruptly, it’s a good thing that our time has just run out, as the portrait version of Daniel is rapidly approaching octogenarian. It’s as if my eyes and my pencil obdurately insist on seeing different things.

Giving up for now, I pack up my supplies and it’s back through umpteen gates (locked unlocked locked again), more corners and corridors, the visitor’s pass is returned, and I am glad to join the city air and waning sunshine again.