#365LoveNotesToSelf is a self-portrait project about giving the person in the mirror two self-loving gifts: time and looking deeply, because…

“If you can’t love yourself, how in the HELL you gonna love somebody else?”

Among the reasons I started making self-portraits is because I had been struggling for some time with low mood and the negative self-talk kept creeping in. I had the idea that the only thing to make it all better, if you will forgive the artist pun, would be to take matters into my own hands.

It was Valentine’s Day, the perfect day of love and kindness. And on that day, I decided to give myself presence – that is, time to really look at myself, if only 20 minutes, in the hopes that the gift returned to me will be a moment or two in which to see something worth loving.

#365LoveNotes starts with looking, an act at once simple and profound. I mean, we find ourselves in a mirror once or several times a day at a minimum – brushing teeth, styling hair, applying make-up, checking our style. It occurred to me that with all that looking over the years of my life, that if my current mood was anything to go by, that perhaps I had missed something, I had not really seen. So here I began, with several minutes of looking at myself, before anything else.

Then with materials I had to hand, be that ink, charcoal, paper and glue, or whatever that chanced to be at the ends of my fingertips, I tried to express what was looking back at me. This first quirky Valentine, snipped and assembled from women’s lifestyle mags, with its mis-matched pieces and flowers for eyes, urges a gentle admonition, Love Yourself.

Taking a step back, I worried that a year of these might become somewhat of a narcissistic exercise, so it was from the 2nd day that each image would be accompanied by a positive thought about self-love and affirmation.

It was also at this beginning that I was met with the powerful inclination to share these little kindnesses, to let them out of my studio, to give them freedom from the binding of my sketchbook, opening up the possibility that by sharing the grace I give to the person in the mirror, just maybe someone else might find a little moment of love for themselves.

15 February 2017, #wednesdaywisdom ‘I am beginning to measure myself in strength, not pounds. Sometimes in smiles.’ – Laurie H Anderson #365LoveNotesToSelf #LoveYourself247365 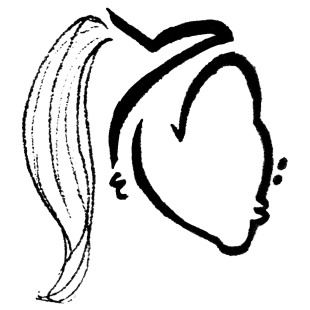 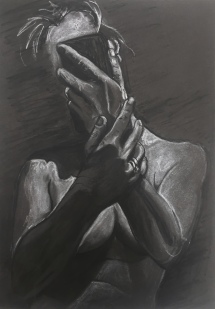 31 March 2017 #FridayFeeling Believe in yourself and all that you are. Know that there is something inside you that is greater than any obstacle. -Christian D Larson #365LoveNotesToSelf Day 46, white conte on coloured paper

What was the result? Was it what I expected?

I suppose I may never know if any of my creative efforts meant anything to anybody else, but now that I’ve done a stack, I definitely feel I’ve achieved something, if only for me. At the very least, I’ve had these three months of days to focus on specific creative skills that are so essential to artists like myself: looking, mark-making, experimentation – all the while, tending to the garden of my inner well-being.

Of course, just as I’d anticipated, I now have 100 self-portraits, each different to the next. I’ve experienced the joy of learning and discovery that comes from experimenting with different mediums, methods, tools, or concepts. And after the initial week or two, I started thinking in terms of a weekly “theme”, such as “black and white” or “digital” or “playtime” as a way to fire up the next starting point – and the ideas just kept ardently coming, quelling any anxieties I might have had about The Blank White Page.

Most weeks included a #ThrowbackThursday, that is, some self-portrait from the past that I’d done prior to this project – the perfect opportunity to glance back and see how far I’d come!

4 May 2017 #ThrowbackThursday Your flaws are perfect for the heart that’s meant to love you.-unknown #365LoveNotesToSelf Day 80, tin, wood, and electric light (‘inside-out self-portrait’, 2001)

06 March 2017 #MondayMotivation I asked my friends once to describe me in one word and I am still humbled by all the words they said #365LoveNotesToSelf Day 21, printed text

23 March 2017 #ThrowbackThursday “We cannot direct the wind but we can adjust the sails.”-unknown #365LoveNotesToSelf Day 38, charcoal on paper, 2014 #arttherapy #selfportrait

What have I learnt so far? What has surprised me the most?

I must admit, doing any something-a-day kind of project very quickly and easily becomes a habit, one that I enjoy and one that is most definitely not a chore. Not only that, but I am convinced my drawing/creative skills have improved, and this experience has fostered new ways of expression and making through daily investigation.

More than anything else, though, my original hypothesis is confirmed; deliberate looking at my own face 20 minutes a day really worked – especially on the days I struggle with depression or anxiety, doing a self-portrait definitely made me feel better – and gave me something to look forward to tomorrow. It’s hard to place a value on that; it’s so true, as one of my favourite Swedish proverbs goes,

There have been surprises, too. Here I was, trucking along with my little project,  thinking not even my partner had noticed I’d started a new one, and out of nowhere, he was adorably curious, getting involved, talking through some ideas for a future week’s theme, and sharing encouragement on Facebook (when he’s not much of a Facebook guy).  Other days, a friend or follower would respond to a portrait, with a retweet, smilies, a thumbs up, or a comment such as, “I really needed that today”. Humbled, I realised that my efforts were touching others.

15 March 2017 #WednesdayWisdom Each star is a mirror reflecting the truth inside you- Aberjhani #365LoveNotesToSelf Day 30, aluminium and mirror

25 March 2017 #SaturdaySecret #EU60 Alone we can do so little; together we can do so much.-Helen Keller #365LoveNotesToSelf Day 40, digital drawing

The biggest ah-hah! moment came when I realised that even “ugly” pictures are still “good”. I might not hold in my hands the most amazingly skilful drawing, but whether or not another person responded positively to what I put out there, I have at the very least enjoyed doing it! In other words, through this project I have gained creative confidence to be assured that what I make is always “good enough”, every day, and not a single of these self-portraits was “bad”. Somehow, a drawing became “good enough”, its intrinsic value realised simply by sharing it, and including it in the context of this project.

And guess what, I have found I do have the audacity to share myself, to show my vulnerability, and I was not in any way harmed by doing so; in fact, I might even be stronger for it. 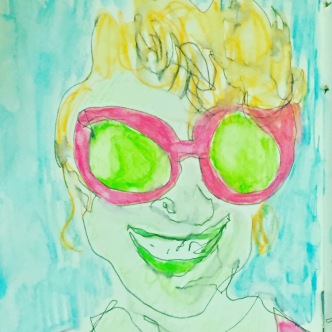 18 April 2017 #TravelTuesday You are allowed to be both a masterpiece and a work in progress simultaneously. -Sophia Bush #365LoveNotesToSelf Day 65, ink and aquarelle on paper #selfportrait #arttherapy #adrawingaday #colourtherapy

5 May 2017 #FridayFeeling “Bonjour, everyone! Don’t worry, everything is bon!” -Team America #365LoveNotesToSelf Day 81, ink on paper

What were the struggles? What are the best bits so far?

This project has not been without its struggles; some days, it is a tussle to squeeze out 15-20 minutes for myself! And as if confronting the girlfriend in the looking-glass was not hard enough, I wanted to hatch a fresh idea for the next self-portrait, to make it different to ones that came before.

For Part 2 of #365LoveNotes (from 25 May 2017 until I make up my mind to change my mind again), I plan to switch gears a bit. I’ll still be looking at myself (cuz what’s not to love there, right?), but this time, the gaze is through the lens of a bit of art history. What I want to try and do is to emulate the self-portraits of other artists, from long-dead medieval craftsman that I’ve dug up from down the back of the Internet, to some of my living peers. The exciting thing is, I don’t know what to expect or what I will find by looking through another artist’s eyes; but I’m excited by the prospects. At the very least, this approach may suggest new avenues for my own artwork by as I toy with ways of making that maybe I haven’t used or considered already.

What was the result? Was it what I expected?

What have I learnt so far? What has surprised me the most?

What were the struggles?

See the next 50 self-portraits:

Part 3 – Love What’s Already Inside You

After 50 days of Part 2: “Finding love in another’s eyes” (in which I emulated other artists’ self-portraits), I’ve decided to turn inwards for Part 3, an exercise in “Loving what’s already inside you“… here I will look at my “inner landscape” so to speak, which I imagine will be around emotional response, abstract, the symbolic, or something entirely unexpected could be the result.

What have I learnt? Surprises?

See the next 50 self-portraits:

One thought on “#365LoveNotesToSelf”

This site uses Akismet to reduce spam. Learn how your comment data is processed.

Just learned today how to sharpen a pencil with a knife... those YouTube’ers made it look so easy! . . . #artistatwork #artiststudio #charcoalpencil #artisttools #learnsomethingneweveryday
Discovering @bobross_thejoyofpainting in V-freaking-R using #oculusquest. It’s like he’s in the room with me. Also, lift up your feet there is a Roomba working the rug... . . . #vr #oculusquest #joyofpainting #digitalart #virtualreality #youhavetotrythis @bigscreenvr @oculus
Lil reminder from a local @britishredcross charity shop ❤️ good for Valentine’s Day as well as any other day! . . . #bekind #kindness #bekindtooneanother #bekindtoyourself
Can digital painting help a person learn to actually paint? Am trying to find out... . . . #learningtopaint #artisanoils #oilpainting #artistsofinstagram #digitalart #artexperiment
Positivity Manifesto... it’s like a 3D poem... . . creating happy . happy empathy . then freedom . . #installationart #textbasedart #positivevibes
Positivity Manifesto installation inside UAL . . . #hope #ihopethisworks #postivitevibes #installationart